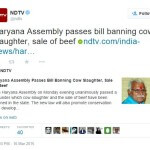 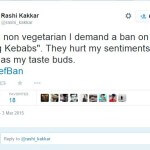 The President of India, Pranab Mukherjee officially assigned an amendment stating that eating beef in the state Maharashtra is no longer legal. The punishment decided for violating this law is imprisonment for 5 Years and charge imposed worth Rs. 10,000, HOW RIDICULOUS! I mean, you just banned the most favorite thing, BEEF! What to say […]