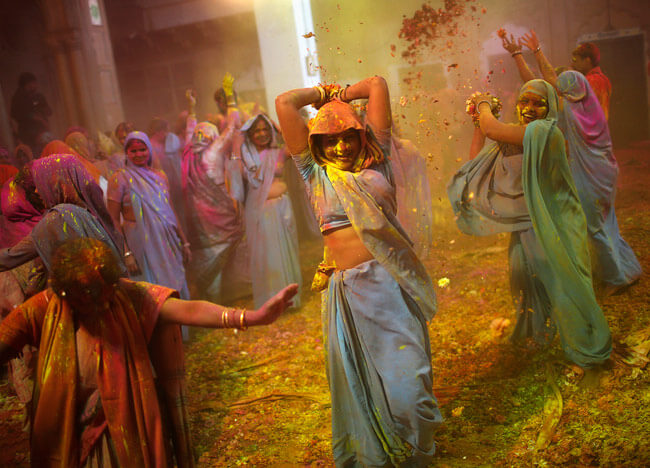 This holi has turned out to be an exceptional one! This Holi, even the saddest ones have joined the joy! A non-government organization, Sulabh International yesterday helped the Hindu Widows taste the enjoyment of Holi by helping them play with the colors this year. Thousands of widows living as recluse in ashrams in Vrindavan and Varanasi were a part of this celebration.

Almost 1,000 kgs of ‘gulal’ or colour powder and more than 1,5000 rose petals were arranged by the NGO to make this festival more joyous for the widows. In an interview with Iamin, Dr. Bindeshwar Pathak, mentor of Sulabh Movement said, “Their participation in Holi symbolises a break from tradition, which forbids a widow from wearing coloured saree, among many other things.”

The widows living in Varanasi played Holi with ‘gulal’ for the first time at the famous Assi Ghat on the bank of river Ganga in Banaras. “Holi will bring some colour to the lives of the Vrindavan and Varanasi widows,” added Dr Pathak. In many Indian cities, widows aren’t allowed to enjoy festivals like Holi, Diwali, and many other important Indian ones, which is the reason why this Holi has been counted in one of the most memorable and historic ones in the history. Vrindavan is known as the ‘City of Widows’ for the sheer number of women who find shelter there after being shunned by their families.

Vrindavan is known as the ‘City of Widows’ for the sheer number of women who find shelter there after being shunned by their families.

So this is how Sulabh Movement attempted and brought smiles over the faces which have never played the festival of colors. This holi, I pledge to be the difference by taking a step forward against Child Marriage and try to bring happiness to someone who hasn’t done it ever!