Acutally, Bhavesh was not blind when he was born, but experienced weak eyesight during his childhood. But when, at 23, his eyes finally decided to give up on him, no amount of preparation could have predicted the gloom that was to come. 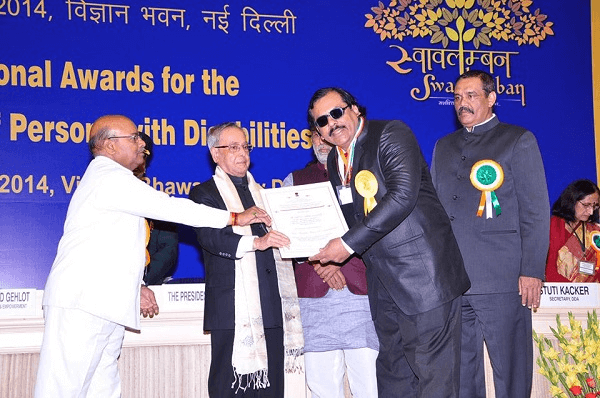 Bhavesh began his earnings by selling candles on the streets in front of Holy Cross Church in Mahabaleshwar and this is where he met his wife Neeta, who visited Mahabaleshwar as a tourist and bought candles from Bhavesh. Soon they became friends and got married. After their marriage, Bhavesh took a loan of Rs 15,000 and set up his factory in his home only with a franchise named Sunrise Candles and since then the company has continued to pursue to success, having clients all over the globe.

Bhavesh’s success sotry hasn’t end here! Not only he wants to expand his company by delivering quality service to its customers but also he plans to take his love for candle making to another level. Bhavesh with his team have built a Wax Museum at Mahabaleshwar and are working on creating a 45 feet high candle to make a world record of creating the tallest and unbreakable candle. He is also keen to participate in the Paralympics events to be held in Brazil in 2016.

Bhavesh teamed up with his wife and a team of professionals to conductt a Wax Museum at Mahabaleshwar and are working on creating a 45 feet high candle to make a world record of creating the tallest and unbreakable candle. He is also keen to participate in the Paralympics events to be held in Brazil in 2016!

Bhavesh is currently 45 years old and when asked him about his success, he said: “I used to be badly bullied in school. One day I came home and told her that I wouldn’t go back from the next day. Everyone ganged up to taunt me with chants of ‘Blind boy, blind boy.’ Instead of forcing me, or worse giving in to my demands, she gently stroked my hair and told me that the boys were not cruel. They want to be my friend, but are thrown by how different I am. She told me that bullying was their way of getting my attention. I had a hard time believing her but did as she told me to. Next day instead of treating with them with the hostility they deserved, I approached my bullies with an offer of friendship. We became friends for life.”