The news is going viral that 10-year old boy from Hyderabad namely Sadiq became Hyderabad Police Commissioner for 24 hours on 15th october, 2014. Sounds strange that how can such a young child, without any kinda experience become the Police commissioner but the story behind this tragedy is that Sadiq is suffering from a life-threatening disease, and can die anytime. This young boy was always having a dream to join the Indian Police Force and become the commissioner of his state.

Hyderabad Police force sacrificed their rules, completing the dream of this young boy’s dream. This boy from Kharimnagar, Telangana was highly inspired from his relatives and neighbors working in the police force. 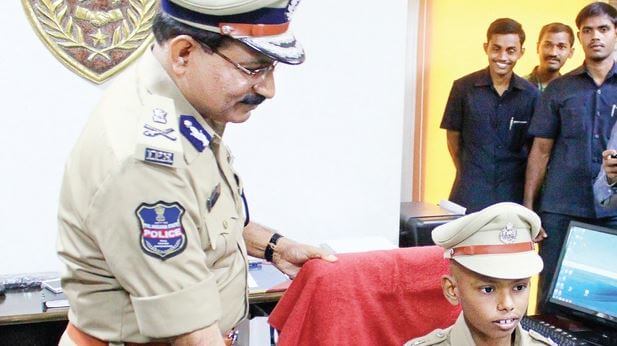 When Sadiq was asked what he’s gonna do if he becomes the police commissioner, he replied:

‘I wanna kill all the rowdies’ that’s it!

Mahendar Reddy, the chief commissioner said that it pleased him to fulfill the child’s wish. Pushpa Devi Jain said that the major aim behind this charge was to give the child happiness that could possibly extend his life span.

She said the foundation helped in fulfilling the wishes of many such children. Some children want to meet celebrities and leaders and we try our best to fulfill their wishes.