Get ready guys as you witness another great example what robotics can do!

Hope you all know what Google does. Well, other than providing great service to people worldwide, Google’s self-owned major robotics lab namely Boston Dynamics have till the date given rise to some outstanding inventions like the BigDog, a four-legged creation which is being used by the U.S. military as the Robot Pack Mule. Well, this time their hands on the programming boards have made out something very lucrative and creative! 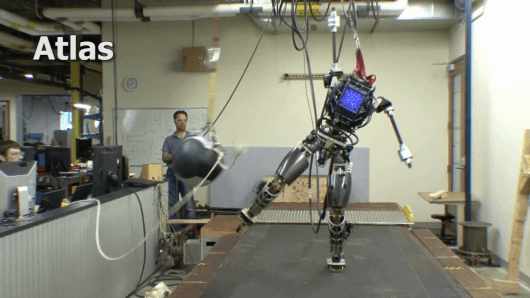 Atlas, a two-legged robot weighing 330 pounds was programmed in the recent days only by the Boston Dynamics. Well, other than calling it Atlas, I think ‘The Karate Robot’ would be a much preferable name because this robot, developed under the guidance Mr. Miyagi and his team in florida, is programmed with the much anticipating moves sensei demonstrated in the movie ‘Karate Kid’.

Atlas has the ability to balance on a foot and raising and lowering his arms. Then this out-of-imagination humanoid robot brings his arms up to the hips, extending his legs to the fullest!

Though the foot movements are not that quick, absolutely and accurate as crane kick scene in the ‘Karate Kid’, the robo do shows off and impressive engineering work over it!

At the time of the robots release a number of questions raised like: Will this invention would be able to take over some of the most spectacular stunts of Hollywood films and is it a depressing fact that it is more coordinating than we human beings.

Well, this robot is not developed for any kinda entertaining purposes but is meant to development technologies to take over tasks that are difficult to be done by us (humans) that can be used in emergency situations. It is not meant for just-like-that purposes.

But still, if have a desire of comparing your robotics’ skills, why don’t you crack a comparison with one of the Hollywood’s world time premiers under the sports category?