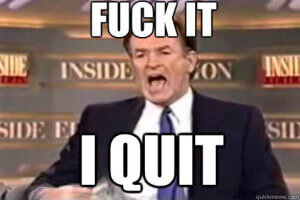 These were the first, and the last demotivating words I’d spoke through my Facebook Wall recently, and the reason behind it was simple, I did not get what I thought I deserved, which, unusually, made me force to think about quitting my blog and lead a simple childhood, like every other friend I’ve.

But after a few days, I became a bit enlightened, and I realized, this isn’t the correct time to quit! Today morning, suddenly, that thought vanished off my mind, and I decided, IT’S TIME TO GIVE A BANGING RESTART!

I successfully overcame the feeling that worked as the biggest obstruction to success, the feeling to quit. And today, I’m fully energized, and now, I have only one thing in my mind, Let’s GO!

So today, I’m sharing with you how this thing, which completely seemed impossible to me, came true, and that if you are stuck in a similar problem, you can get out of it!

I failed…let it be, now let’s start something new!

This was the first thing I’d try to inculcate when I was totally broken and had lost all the hopes. I told myself: ‘I failed, and now I can never succeed again’.

But at that time, I’d forget, If one door is closed, two as backup are open! And that’s what hit my mind, if I failed in one of the experiments, it’s all right! Failure comes in everyone’s path. Now let’s try something else!

I gotta be a little patient…LITTLE

This is my biggest, and I mean BIGGEST problem, I can’t live without instant results. And it becomes like, I did something on Wednesday, and I want its results at least by Friday. Though it seems fantasy, it is the harsh truth.

Most of the days, when I get demotivated, something BANGS on in my mind, which reminds me of Harsh Agarwal, my idol, my inspiration, my mentor. How many years it took him to turn ShoutMeLoud from nothing to a gold mine. That day, this inspiration too went weak, and I just didn’t know how to proceed.

But….after a long discussion with a bit of my friends, I realized where I was Mistaking! Where it went shot!

And that day itself, I decided, all I need is a bit more patience and dedication, to thrive out as a successful man, OPPS, I mean a successful boy..or man! CRAP! 😛

….Okk, so all I need to be successful is patience and dedication [simple]!

It’s a long way to go, and I have a lot of time to succeed

Generally, I get dozens of appreciations who know that I am pursuing in the field of online marketing and that running such an awesome blog (the masses say SenseBin is awesome, I still don’t think so 😉 ) but actually, they don’t know that I’m not on the spot they think I am!

One thing that was in my mind after stepping in the online world was that being a child, and doing something every one of my age isn’t doing, I’ll get a special treatment from all those whom I connect.

But, being a child helped me, gave me a benefit which is actually valuable! It is sweet, simple, and sensible!

Today, I’m just 13. No worries, except studies. And managing studies along with blogging isn’t a big deal for me. So, starting from today, I have a long way to go, which means, I have a lot of time with me. Today, I don’t even have the basic senses of life, and that I blog and write about whatever seems to be joyful to me!

So I’m free to write and do anything. And like I said in the previous measure, patience is, no doubt necessary to be successful. And in case I have LOTS of time, patience, and yes dedication with me, success is following me, and one day, will turn immensely grand!

So these were the three magical wands that helped me come out of the period of depression and thrive towards the success I deserve, and that if you are in a situation similar to me, these tricks will surely help you out!