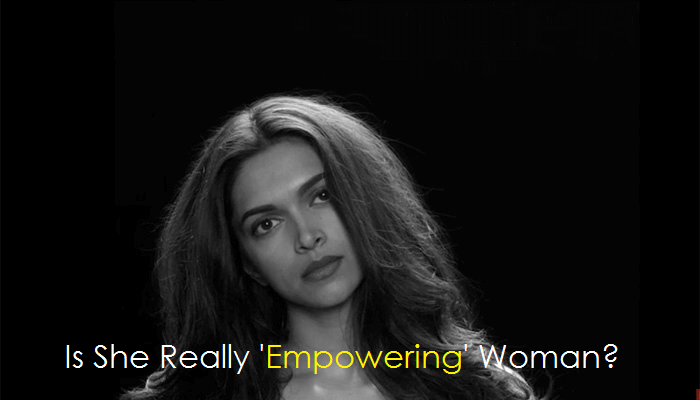 One of the recent viral videos include Deepika Padukone’s step of empowering women in the society, which has been supported, as well as criticized by many. (Watch it out here!) I watched the video, and I truly am in support with the statements Deepika made in it. But does she really mean them or it was just a promotional activity?

No doubt every woman has her own choice. It’s up to her; whether to fall in love or not, whether get married or not. But seriously, being a girl and loving a girl; having sex outside marriage, are all these dignified statements in our society? ABSOLUTELY NO!

If a girl would have the liberty to love another girl, then God wouldn’t have created two different genders? And, though the knowledgeable ones will support it, will you allow two men to do so? Ask yourself!

And another statement…Having sex outside marriage? GOSH! This is absolutely a nightmare to our society, and neither of the genders should be allowed to do so. Another point which proves that it was jut about promotion for Ms. Padukone was her appearance in AIB knockout. I’m not saying that being a part of an event is wrong, but laughing and cracking talks on women amongst and following that, making such a video….WHAT TO SAY..I AM MYSELF CONFUSED!

No doubt her video was appealing, which had a very strong message for the society, but some points in it proved to be ineligible too!