The recent reports by the board of directors of WWE have made it official that John Cena will be in a battle with Dean Ambrose at Hell in a Cell 2014 and the winner is gonna face Mr. Money in the Bank, Seth Rollins, in a Hell in a Cell match the same night!

The report was made official on Smackdown stating that Cena and Ambrose will compete in a no holds barred contest at Hell in a Cell, hanging up a contract on a pole for the match against Rollins inside the cell!

Though this week’s Raw wasn’t a BLAST for the wrestling fans, as Rock makes his appearance attacking Rusev, the authority had a big news for Ambrose and Cena. 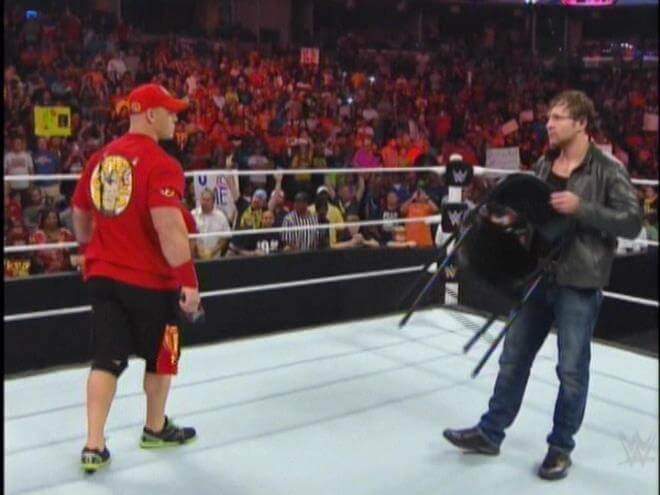 The drama started building at WWE Raw on Monday when Cena took on Randy Orton, Seth Rollins and Kane in the main event. While Cena was certainly at the point of victory, the 3-on-1 assault on Cena led to the result of disqualification.

Have a look at that intense match below:

So, the ultimate outcome is that Cena and Ambrose need to perform their best and lead each other to hell to get their hands on Seth Rollins.

As Cena was being capitalized by Orton and Kane, Rollins took the responsibility, using the Blockbuster from the middle rope to continue the demoralization at Cena. However, as he tried to gain some control, all 3 went after Cena, forcing the referee to ring the bell.

As the bell rang, Cena went through a demonstrating Choke Slam from the hands of Kane, Dean Ambrose appeared with a fast food stall with him, spraying the mustard and red sauce on the face of Kane and Orton. Of course, he then helped out Cena putting the authority guys to a punishment and yes, took out John Cena, probably his opponent, walking out the last man standing out of Raw.

The growing enmity between Cena and Ambrose would definitely lead to an interesting Storyline controversy and after this announcement, I just can’t wait for Hell in a Cell 2014. It is also clear that both Cena and Ambrose want their shots at Rollins, considering the fact that he is the prize awaiting the winner.

Well, all I can say for both of them is:

‘(Cena or Ambrose) you better save your fuel and anger for Seth Rollins’.