Kalpana Saroj has remained one of the most inspiring entrepreneurship figures all over India and is often regarded as the true “Slumdog Millionaire”. Born in poverty and after suffering unwanted abuse from every section of the society, Kalpana still had the courage to do something of her own and today, is a successful $112 million entrepreneur! 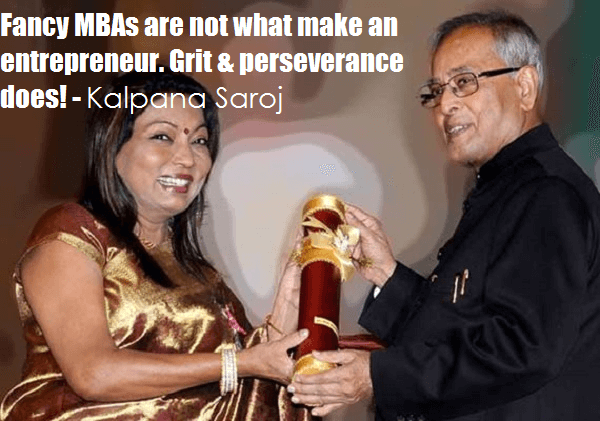 The one lesson I want to prove from Kalpana’s story and that what she always remembers is:

Is that ivy league degrees and fancy MBAs are not what make an entrepreneur. Grit, perseverance and a superhuman ability to have faith in yourself does.

Kalpana was born in Vidarbha. Her father was a constable and they used to live in the police quarters assigned to her father. They were total of 5 siblings. She was always a bright student and loved to go to school. Kalpana and the other students saying in the quarters weren’t allowed to play games. father was not a very educated man, but courtesy his job in the law enforcement, he was emancipated in his views and wanted me to complete my education. But in the Dalit community where I grew up, child marriage was the norm. My father’s refusal was drowned out by the

Kalpana’s father was not a very educated man. He was emancipated in his views and wanted Kalpana to complete her education. But in the Dalit community where she grew up, child marriage was the norm.

Though Kalpana’s father didn’t want Kalpana to get married in her childhood, he was powerless against their united front.

In the community Kalpana lived, girls are considered to be a burdens. When her father brought her back home, not a single eyebrow was raised at what she had been made to go through. What caused the hysterics was the ‘shame’ I was bringing upon my family, community and society at large by daring to return home a married girl.

However, the shame they experienced was because she seemed to be brought upon her family, community and society at large by daring to return home a married girl. After losing all hopes and considering her life not worth living, Kalpana decided to commit suicide. However, a mind-provoking thought struck in his mind i.e. Life is hard, but dying is easy.

Kalpana’s aunt saw her eating up the poison tablets and quickly rushed her to the hospital. She was in a very critical condition and doctors informed her parents that if she didn’t regain consciousness within twenty four hours then it would be impossible for her to survive!

Journey to an entrepreneur

Money was scarce for Kalpana. Moreover, her sister became sick and it was difficult for them to afford the treatment. It was this time when she realized that life is impossible to live without money and then, she started working over sixteen hours a day, alike her daily routine even nowadays.

Kalpana learnt everything about being an entrepreneur, from the ground up through this business- sourcing raw materials, the art of negotiating, identifying market trends and, above all, holding her own among a sea of crooks trying to take advantage of me.