‘This’ girl married ‘that’ boy, is the thing you hear most commonly. But have you ever heard a girl marrying herself?? EXTREMELY weird, isn’t it? Well, I’ve recently come across a girl who did the same, Married herself, yes, you read it right, HERSELF after staying alone for 6 years and today, she writes an open letter to those who think it is nuisance.

When I told my family and friends that I was planning to marry myself, my gran, who has since passed away, said: “Oh, you always think of something new, Grace.”

My parents, who are very open-minded, also took it in their stride. They’d got used to my attraction to the wild and the wacky. “As long as it makes you happy, Grace, we’re fine with it,” was their reaction. 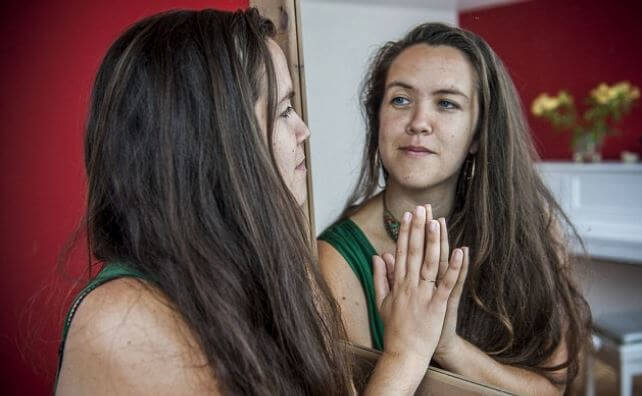 Grace Gelder; the girl who married herself!

And although I’m pretty sure a lot of my friends weren’t convinced that I would go through with it, those I initially confided in thought it was a great idea and were really supportive.

A few did comment, in a light-hearted way, that it was a bit narcissitic. Obviously, if you’ve just announced you’re marrying yourself, it is plainly a statement of self-love, and I was under no illusion how self-indulgent that might appear. But I was completely comfortable with my motivations.

Not that I could say with any certainty how exactly I’d found myself in the rather surreal scenario of proposing to myself on a park bench on Parliament Hill last November.

I do, however, have a strong recollection of when I was 18 at university and studying performance art, hearing that line in a Björk song called Isobel: “My name’s Isobel, married to myself,” and thinking, crazy as that sounds, I totally get that. It’s about making this pact or promise to yourself and then somehow enacting that in how you live your life from that day on.

More recently, I’d been on a journey of personal development using meditation, dance and performance to increase my self-awareness.

Included in this was a Shakti Tantra programme focused on sexuality and how this was bound up with making agreements with yourself and other people.

Sitting on that park bench, it dawned on me that a self-marriage ceremony witnessed by other people would potentially be this massively powerful means of making those agreements stick.

As with all these things, however, timing is crucial. I’d been essentially single for almost six years and built up this brilliant relationship with myself. Nevertheless, I was aware of getting into a rut, where a relationship with someone else seemed like too much hard work. So I really wanted to pay tribute to this adventurous period of self-discovery but, at the same time, look forward to a new phase.

But how to proceed? One of my really close friends, Tiu, is a truly wise and wonderful woman and she had just completed her training as a celebrant.

Naturally, I went straight to her asking her to assist with planning the day and leading the ceremony. It was to be her first marriage, let alone self-marriage, so that made it a momentous occasion for both of us.