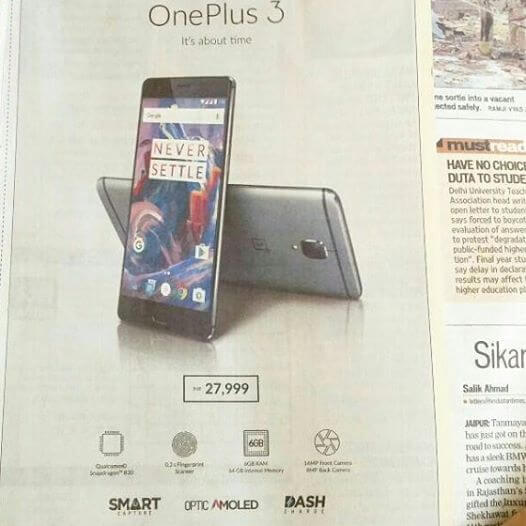 We literally had a complete idea as of what we’re going to see in the OnePlus 3, which almost made us forget about it and this proved to be the last nail in the coffin. All that we didn’t know about the OP3 was it’s price, which has been revealed by a Newspaper advertisement.

As we all know, OnePlus 3 will be available in a 4GB RAM and in a 6GB RAM variant, and that the 6GB RAM variant is priced at Rs. 27999. WTH. Like, atleast they would have kept this thing a secret. Anyways, inside the OnePlus 3 you have a 5.5-inch display with Snapdragon 820 inside it with a 16MP rear and an 8MP front facing camera.

You have Dash Charging, also known as fast charging in the OnePlus 3 with an Optic AMOLED display. So coming to the bottomline, OnePlus 3 is going to be a big bang beast in the Indian market, while he has got several high-end competitors standing in front of it like the Le Max 2 and Zenfone 3 Deluxe, offering almost the similar specifications. Now let’s see which one emerges as the winner in the 3-horse race