#WhoIsSafe. Union Education Minister Smriti Irani today spotted a hidden camera in trial room of Fabindia showroom in Goa. Mrs. Irani who is on her holiday in Goa, today went for shopping in the Fabindia store in Candolim and selected a few dresses. When she entered the trial room to try the dresses, she spotted a hidden camera which was positioned in a way that the lens were pointing right into the trial room.

Say a big NO to Fabindia, this how we can punish them for playing with the modesty of women.

“The camera was not easily visible”, says Mrs. Irani. 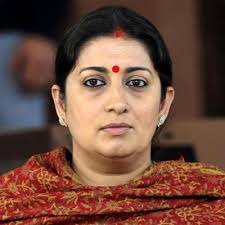 Smriti Irani immediately raised the alarm and called her husband Zubin Irani. The couple then called a local legislator Micheal Lobo who lodged an FIR against the store.

Mr. Lobo in an interview with NDTV said that, “When we went through the recording, the entire video was recorded… This is mischief… Somebody has been watching the recordings.”

The camera was installed four months ago and the entire footage was recorded in a computer which was kept in the manager’s office. The police and Mr. Lobo checked the footage and found that the computer has lot of unedited clippings recorded from the trial room.

The case is registered for outraging women’s modesty against the store. The investigation is still ON and according to a report submitted by NDTV, the manager was on leave.

Fabindia is one of the leading Indian chain store retailing garments, furnishings, fabrics and ethnic products handmade by craftspeople across rural India. It is one of the most popular chain stores in India and installing a hidden camera in a trial room is absolutely disgusting. Union education minister Mrs. Irani has recorded a statement at the Candolim police station and police is investigating the matter.

If you have done some shopping at the Fabindia Store in Candolim, Goa recently you might be in the footage recorded by the camera lens positioned in the trial room. There are a lot of such cases being noticed these days and ladies need to be very very careful while using the trial room of any small, as well as reputed showrooms.

Today when whole India is worried about the increasing rape cases in the nation, such reputed stores are silently playing with women’s modesty. Such idiots are no less than the rapists and should be given strict sentence.