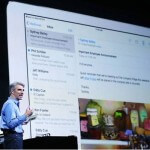 Apple today made it’s official announcement of it’s next Software update for iPhones and iPads. iOS 9, the next update officially announced will be supporting various devices like iPhone 4S (which I have!) and above, iPad 2 and above, all iPad mini models, and iPod touch fifth-generation. The update isn’t that huge as the users won’t […]