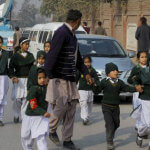 Official authorities of Khyber-Pakhtunkhwa province in Pakistan were warned of an upcoming shootout attack on an army school in Peshawar months before it took place i.e. August 2014. As per the reports by Geo News: Taliban commander Khaksar in Orakazi, a part of the (FATA) Federally Administered Tribal Areas, along with two of his terrorist colleagues, […]