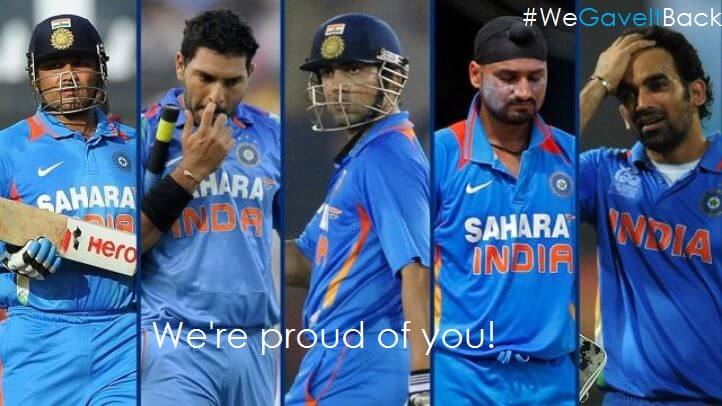 Dear team India, all I have to say, we’re proud of you!

I don’t know how to start off. Such brilliant performance throughout the world cup, but in the end, a few small mistakes caused the stake a lot! Australia won the match, by all fair means, and honestly, they were better than you on the pitch, and thus, the better team won.

But no matter if you lost the world cup, you put up all of your dedication, time, diligence and hard work to the tournament and came out with flying colors, but speaking in a true way, your performance was disappointing yesterday. I must say, you should not be ashamed of your performance. You gave the best of yourself. And people, who truly are cricket fans, would be proud of you.

Instead of being disappointed of the performance you showed against Australia, you should be proud of the glory you’ve brought about to our nation by remaining undefeated almost throughout the World Cup. All I would say at the end of this short note is,

‘YOU’RE ONE OF THE BEST! LET’S HOPE FOR A MUCH BETTER PERFORMANCE IN THE COMING YEARS!’

Now, talking about Anushka Sharma’s controversy. If you are a mature, sensible fan, which I think most of my readers are, there’s no point blaming the Actress for either Virat Kohli’s bad performance or for India’s loss. Let me ask you a simple question: ‘How can you assure that if Virat Kohli would have scored a century, India would have won.’ The only player to be blamed for Kohli’ dismissal is the player himself.

Just give me one vaild reason why it was Anuskha Sharma’s fault. I mean, in such a whole croud, you got only her to be blamed. Just because she is a celeb, and is in a relationship with Virat Kohli. GOSH! Dumbs, change your mindsets! It isn’t the Indian cricket team who’ve lost, it’s the Indian fans who have!

You performed well, acted like true men, fought all the difficulties that came about in your path. But in the end, the better team moved on, and yes, #WeGaveItBack.

So, if you i.e. the Indian cricket team have senses, then accept your loss, appreciate the qualified teams, show sportsmanship, word hard, and bring the cup back to home next time. This is what a true cricket fan wants from you! And don’t think this letter is to demotivate you,

WE WERE, WE ARE, AND WE WILL ALWAYS BE PROUD OF YOU!