Rumors and leaks for the big MWC 2016 are getting the heat every moment. The big names who really matter in the event are Samsung, Xiaomi Mi 5. With Samsung unveiling S7 & S7 Edge’s pictures and LG G5 leaked online, it was Xiaomi’s turn next as they leaked out the most anticipated, Mi 5 today.

The Xiaomi Mi 5’s leaked images signify some specifications leaked out too! 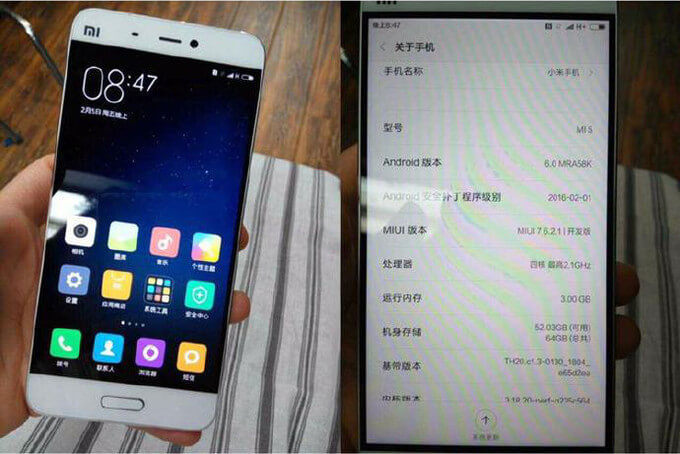 The image of the alleged Mi 5 shows it runs on the Xiaomi’s MIUI build 7.6.2.1. interface on top of Android 6 Marshmallow, with its processor clocked at 2.1 GHz. It also shows that the device features 3GB of RAM and 64GB of storage confirming earlier rumours.

The device comes with a 5.2-inch of Quad HD display and will boast a Snapdragon 820 chipset in it, which is something we’ll see in numerous flagships coming up their way in 2016. The pictures also suggested that it will offer 6-element 16MP rear camera with f/2.2 aperture and is capable of shooting 4K videos.

It also looks like the phone will not have a 2.5D curved glass. The design is quite nice, curved a bit as we all expected as we’ll see a much thinner home button on the bottom, pretty clean!

The device is coming at MWC 2016 in the coming days as we’ll get to know how close the rumors were in terms of design and specifications. Stay tuned to get all the MWC updates!